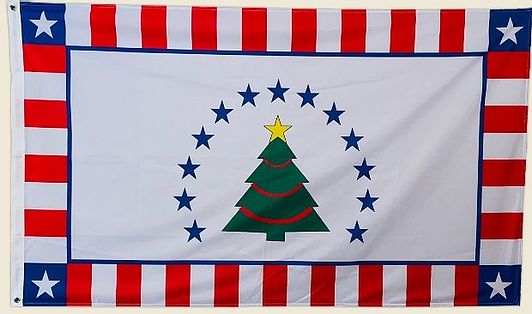 The American Christmas Flag is a company based in South Jersey that found a beautiful way to combine Christmas and American patriotism. There is an interesting two-part story behind the company. Jack Brangan has the “ancient history” version that talks about the birth of the flag and Stephen Dowling, his son-in-law, has the rebirth and formation of the company covered.

Let’s go back to December 1980, Wenonah, NJ where Brangan and his best buddy, Stuart DeHart, were thinking of ways to combine Christmas and America. Both guys weren’t very political or patriotic at the time, but the genesis of the flag was more than just a political statement. As America was shrouded in this dark time when American hostages were taken by Iran, the partners saw a creative opportunity to lighten up the spirit of Christmas and the American patriotism. The hostages were released during the Christmas season and around the same time, Jack and Stewart conceptualized a flag design that is the first – maybe even the one and only – of its kind.

A lot of thought went into the design. “It is not just an empty design,” says Bregan, “there’s some American history in the flag”. The 13 stars over the Christmas tree are the original 13 colonies. The 50 red and white bars that make up the border are the states. And the white stars on the corners represent the four corners of the country.

The American Christmas Flag’s history was not always one for the books. For one, the idea drew some flak in the 80s for merging patriotism to the religious holiday. Some people chimed “separation of church and state,” and eyebrows were raised. Nonetheless, the duo’s idea blossomed. It started with a simple week-long advertisement in a magazine (which was shot from a makeshift photoshoot in their living room) and it ended up selling a handful of flags. However, it was the 80s – without the free publicity and the perpetual depth of the internet, print ads needed cold hard cash.

Fast forward, decades later marriages and kids came along, and the flags became less of a priority. And once you consider advertising in the pre-internet days, where ads would only run for a week (as opposed to virtually forever on the internet), it was expensive. So the flags were packed up and placed in the basement for about 40 years collecting dust.

The only trace that remained was a little tabletop flag that survived over the four decades. It was discovered by Stephen’s three-year-old daughter, Josephine, in 2019. It was sitting on top of a desk, minding its own business. She picked it up and paraded it around the den.

When Stephen saw it, excited, he turned to his father-in-law and said, “Jack, what is that?!” Bregan told him it was The American Christmas Flag. Steve went “to the depths of the internet” and found nothing remotely comparable to it. He couldn’t find anything quite like this that “says something without saying a lot.”

Luckily, this trademarked flag has been rebirthed in this new age. After much conversation and planning with a new partnership (Jack and Stephen), the dust has turned into a silver lining. Timing has its own way of making things work since the recent turn of events made the flag all the more meaningful. According to Jack, “Maybe it was in the basement for 40 years because the time wasn’t right.” it makes a lot more sense now, and this opportunity may be the plot twist they have been waiting for.

The company is “not pushing a narrative on people to what this flag means,” Stephen explained. He continued, “We’re giving you the idea of what the design states.” So if there is any meaning to it, it would have to come from people’s hearts.

The fusion of patriotism and holiday cheer is not something you see every day, but the flag still pulls at the heartstrings. Individual stories and experiences will make the meaning and purpose different for everyone who purchases the flag. While Jack and Stephen’s anecdotes are enough to pique your interest, one could definitely write their own unique story from the American Christmas Flag.

The flag is being sold on their website, along with other decorations, such as throw pillows, coffee mugs, aprons and glass tree ornaments. With the holidays virtually here, start your holiday decorations with them!